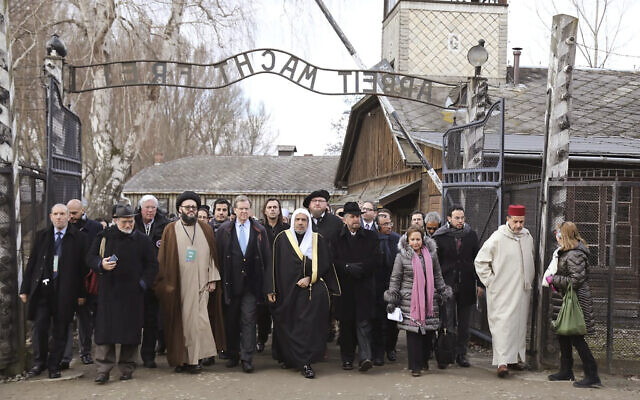 When I saw the picture of the leaders of the Muslim World League visiting Auschwitz last Thursday to commemorate the 75th anniversary of the camp’s liberation, it shocked me as much as when Yasser Arafat visited the Anne Frank House in Amsterdam in 1998.

The Muslim World League, based in Mecca, has been Saudi Arabia’s main exporter of radicalism and terrorism throughout the world in the past decades. This organization, that is close to the Saudi government, has a massive influence on mosques,  imam’s and Muslim communities in the East and the West. I experienced this first hand in 2004, when I still lived in Amsterdam. Dutch film maker Theo van Gogh was brutally killed five minutes from my home by a Dutch-Moroccan terrorist, who attended services in a mosque in Amsterdam affiliated with the Muslim World League. He stabbed a letter to Theo van Gogh’s body in which he threatened Ayaan Hirsi Ali and “the evil Jews”. The Muslim World League has supported terrorist organizations like Hamas and Al Qaeda. Bin Laden’s brother-in law led one of the MWL’s offices. The Muslim Brotherhood had close ties with the MWL.

Since 2008, the Muslim World League has actively promoted itself as a champion of interfaith dialogue and outreach to Jews and others. Yet, at the same time the MWL invited Muslim Brotherhood leader Yusuf Qaradawi, who openly advocates jihad against Jews and the West. At the event, Qaradawi said he would “never sit with Jews on one platform and never hold dialogue with those Jews who have committed injustice against us and support Israel.” In 2009 MWL’s international journal featured a cover story with conspiracy theories about Jews controlling the media.

It is true that recently a new day broke in Saudi Arabia with the rise to power of Crown Prince Mohammed Bin Salman. The young ruler developed an inspiring and ambitious vision for the economic and social innovation of his country. He decreed a more liberal religious approach and replaced several key religious leaders with ones that take a liberalized stand. Also the Muslim World League got a new leader, who takes a more liberal position.

In the view of the Crown Prince, for the young people of Saudi Arabia (80% of the population) to feel happy, stay in their country and develop their economy as entrepreneurs, they need more freedom from religion, more women in the workforce and more opportunity to play. In the vision of the Crown Prince, entrepreneurship is crucial for the country’s future. Diversifying the economy away from its current source of income, oil, is necessary given the fact that the end of fossil fuel use is in sight.

With the leadership of the Crown Prince the Kingdom also takes a more friendly approach towards Jews. Jared Kushner and the Crown Prince reportedly are friends. Jews are board members and business partners at Saudi projects. And there is military and intelligence cooperation with Israel. In an interview in 2018, the Crown Prince even mentioned Israel’s right to exist and criticized the Palestinians. This warming up to Israel is mostly driven by the common threat of Iran.

There are rumors that President Trump will soon announce a new peace plan for Israel and the Palestinians. This plan supposedly has the support of Saudi Arabia. This would be a historic and exciting step forward for Israel and the global Jewish community. But we must keep in mind that antisemitic textbooks were used only recently in Saudi Arabia. And that the leader of the Muslim World League, the one before the newly appointed one, called Jews “perfidious in nature” and denounced “the Israeli Holocaust in Gaza.” The visit of the Muslim World League to the sacred memorial of Auschwitz therefore seems premature.